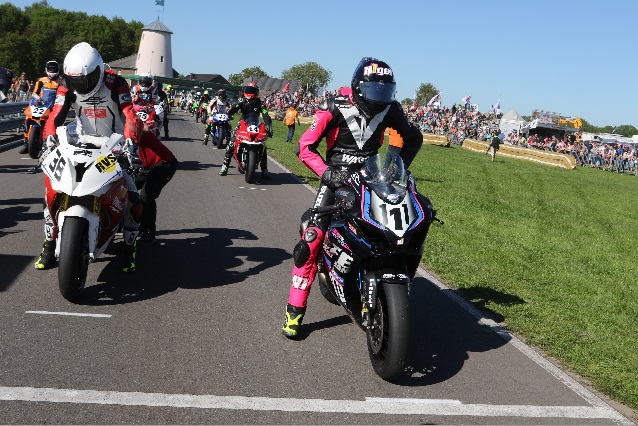 On Saturday 5 May and Sunday 6 May the road races were held at the Varsselring. On Thursday evening there was a successful riders parade from the circuit to the center of Hengelo where a riders presentation took place. With a big attendance of riders and audience, the Hamove is very satisfied and this experiment will be continued in 2019.

Walraven wins four races and set a new lap record on the Varsselring
Nigel Walraven became the big rider of the event in Hengelo GLD. The Suzuki rider from Vuren won no less than four races on Sunday, including two for the IRRC Superbike and two in the BeNeCup Superbike. Walraven had his mind set on the lap record of Arie Vos, which dated from 2014. In the first BeNeCup race Walraven was still 0.077 seconds short, but in the second IRRC Superbike race he get it. Walraven was riding a 1: 45.480 and with this lap time he can call himself the fastest rider ever on the Varsselring. Walraven could’nt score points as a guest rider for the IRRC Superbike. Danny Webb scored with two second places the full points in the opening round of the championship. Didier Grams and Erno Kostamo became both one time third in the IRRC Superbike.

Lagrive scores full points in the IRRC Supersport
The IRRC Supersport delivered two exciting races full of sensation. In the first rac, there was a leading group of four riders, who was pulled apart when polesitter Pierre-Yves Bian crashed in the Molenbocht. Matthieu Lagrive won before Laurent Hoffmann and guest rider Kevin van Leuven. The bad luck for Bian was not over yet, because before the start of the second race the Frenchman had to put his Yamaha aside with technical problems. His compatriot Lagrive managed to beat Hoffmann again in the second race, but the fight lasted until the last lap. Lagrive is a well-known rider from the World Endurance, in which he won several times the world title. In the second race there was another Dutchman on the podium. This time it was Thijs Peeters who gets the third place.

Hamove members compete with each other in the 2-stroke class
After the success of last year, there was again a 2-stroke class in this edition of the road races in Hengelo. Luke Notton was the fastest of all with his 350cc Yamaha. For the fourth place in the race there was a nice fight between four Hamove-members. Tasia Rodink won this battle and she also became the fastest in the 125cc class. Michael Hofman, Tonny Wassink and Ernie Sala became fifth, sixth and seventh. Marcel Ritzer crossed the finish line in seventeenth place. Hofman had a busy schedule because he also rode in the BeNeCup Superport and Superbike. Hofman was sixth and tenth in the Supersport category. In the first race of the BeNeCup Superbike, Hofman had a battle with another Hamove member: Marcel Zuurbier. They fought togehter for the eighth place. Zuurbier won this battle. Hofman didn’t start after his busy day in the second race. Zuurbier became sixteenth in the second race.

Bennie Streuer and Gerard Daalhuizen supreme in the ONK/BK Sidecars
At the Varsselring, the sidecars could scored points fort he Dutch and Belgian championship. Bennie Streuer was already the big favorite with his passenger Gerard Daalhuizen. The combination won both races with a big lead. John Smits and Gunter Verbrugge finished twice as second. Hilbert Talens and Werner Wiegers finished third in the first race. After the second heat, Ryan and Callum Crowe, from Ilse Man, were the third combination on the podium. In the NK Classics, Jan Frank Bakker and Ernst Hagen were able to win the races. In the Camathias Cup, Hendrik Jonker won the first race with Rebecca Sirrell. Bruno Noel and Germain Sachhettini won the second heat. Also the caferaces with the V-Ring Treffen provided a number of demonstration laps on the Varsselring.