Int. Road Races Hengelo GLD; who will be the king of the Varsselring in 2019? 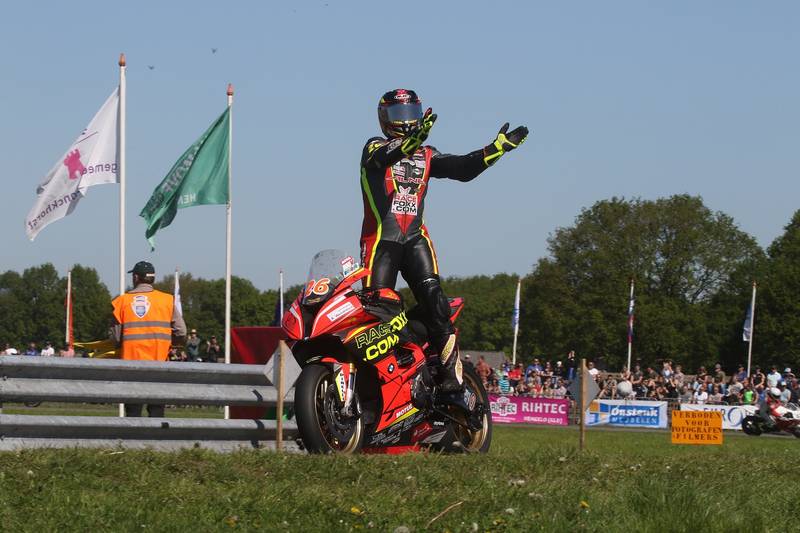 The Hamove organization is busy with the final preparations for the International Road Races 2019 at Hengelo GLD. Saturday 11th and Sunday 12th of May there are seventeen races in nine different categories on the program. The event is the opening round of the popular IRRC Superbike and IRRC Supersport championship. Last year Nigel Walraven was the big man with four wins on the Varsselring and the important question is; who will take the title ‘king of the ring’ this year?

New round and new opportunities for the IRRC Superbike and IRRC Supersport riders
The event on the Varsselring is for the International Road Race Championship the opening round of the 2019 season. Former Grand Prix rider Danny Webb defends his title in the IRRC Superbike. In order to extend his championship, Webb has to beat last year's competitors Marek Cerveny, Didier Grams and Erno Kostamo. The fact that last year's top four consists of four different nationalities clearly reflects the development and appearance of the championship. Webb will also compete against two fast new British teammates. Daley Mathison and Davey Todd have already shown with the British road races that they are very fast. The 23-year-old Todd is seen as a great talent and he was the fastest newcomer during the Isle Man TT last year.
Last year Webb was beaten by Nigel Walraven, who took part in the event as a guest rider. Walraven won four races and set a new lap record on the Varsselring. Walraven can’t make it to the start this year because he will ride in the World Endurance championship. Matthieu Lagrive is the reigning IRRC Supersport champion. The Frenchman is also multiple World Endurance champion. The competition led by Laurent Hoffmann, Thomas Walther and Pierre-Yves Bian will do everything they can to keep Lagrive away from his second title in a row.

World class Sidecars, the new BeNeLux Trophy and more!
Besides the IRRC there are also double races in the Superbike and Supersport class of the BeNeLux Trophy, the former BeNeCup. World championship teams are on the grid in the Sidecars with Bennie Streuer and Kevin Rousseau and also Tim Reeves with Mark Wilkes. Both combinations start with a 600cc engine, while most of the sidecars run with a 1000cc engine. This can make the battle between the World championship heroes against the fast 1000cc combination of John Smits and Gunter Verbrugge very interesting. New on the program this year is the Belgian Twin Trophy, a popular two-cylinder class with riders mainly from Germany and Belgium. There are also traditionally races for the Camathias Cup, 2-stroke class and NK Classics - IHRO. With the Classics we have a very special anniversary, because for Ton Groot it’s exactly 50 (!) years ago that he rode his first race at Hengelo GLD.

Opportunities for Hamove members in various classes
Performance Racing Achterhoek is of course not missing during their home event. The team of Tonny Wassink will start with four riders: Ilja Caljouw in the IRRC Supersport, Virgil-Amber Bloemhard and Frank Gallagher in the IRRC Superbike and the team owner himself in the 2-stroke class. Caljouw is a podium candidate and he will also ride in the 2-stroke class with the electric bike from Electric Superbike Twente. Bloemhard returns into road racing after a few years of absence. Gallagher is preparing for the Isle Man TT in Hengelo GLD. Caljouw, Bloemhard and Gallagher will also start in the BeNeLux Trophy.

Last year was newcomer Thijs Peeters a big surprise with a double victory in the BeNeCup Supersport. Peeters, member of the Hamove, will start this year on a BMW in the Superbike class of the IRRC and the BeNeLux Trophy. With Marcel Zuurbier, Michael Hofman, Marcel Ritzer and Ernie Sala has the Hamove more fast members on the track during the race weekend.

Seventeen races and plenty of entertainment in the paddock
The practivce sessions start Saturday morning from 8:30h. All classes will run two qualifying sessions. At the end of the day the first race for NK Classics - IHRO and the Camathias Cup will be held. Sunday's program is very spectacular and packed with no fewer than 15 races. The rac eday starts at 9:20h and the last race will start at 5:30h. The races are easy to follow from various stands along the circuit and from the main stand the spectators also have a view on a video screen. With a ticket you also have entrance to the paddock. There is also plenty to do for the children and Saturday evening there is live music in the race café.
A Sunday ticket for adults is 20 euros, but you can now also order it online until May the 5th for just 15 euros. Children up to 12 years old have free access and youth from 12 to 18 years pay 10 euros at the desk. The costs for a weekend tickets are 25 euros, but you can order this until 5th of May at www.hamove.nl/tickets for 20 euros. We hope to see you on Saturday 11th and Sunday 12th of May at the Varsselring!