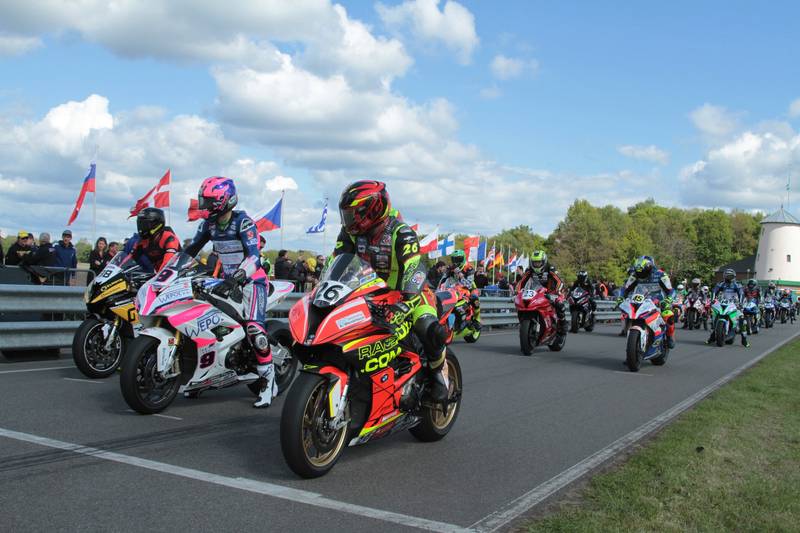 There was a good and pleasant atmosphere during the 52nd Road Races on the Varsselring at Hengelo GLD. There were also exciting races on the track, which means that organizer Hamove can be very satisfied with the course of the event. The weather conditions were good during the 2019 international road races at Hengelo GLD. The event started with a successful riders parade. On Saturday the practice sessions were completed with two races and on Sunday the Hamove was able to honor 15 race winners at the Varsselring.

IRRC win for Todd and Lagrive on the Varsselring
The main number of the road races at Hengelo GLD is the International Road Race Championship (IRRC). Davey Todd was on the Varsselring for the first time, but nobody recognized that. Todd had to leave the pole position in the IRRC Superbike to Didier Grams, but he was the strongest in both races. Marek Cerveny and Grams finished second in one race. Erno Kostamo finished third in both races. Reigning champion Matthieu Lagrive was the best in the IRRC Supersport. Countryman Pierre-Yves Bian was his biggest competitor with a second and third place.

Podium places for Hamove riders
There were more podium places for Hamove rider. Marcel Zuurbier managed to score second and third place in the Belgian Twin Trophy. Ilja Caljouw fought for the win in the BeNeLux Trophy Supersport and finished second and third. Michael Hofman also went to the podium after the first BeNeLux Trophy Supersport race. The English rider of Performance Racing Achterhoek Frank Gallagher was in sixth place in the BeNeLux Trophy and thirteenth in the IRRC Superbike. Caljouw rode also an electric bike from Eletric Superbike Twente in the 2-Stroke class, in which also Marcel Ritzer and Tonny Wassink participated.

Drama and sensation at the ONK-BK Sidecars
In the ONK-BK Sidecars there were two great races full of drama. Polesitters John Smits and Gunter Verbrugge had to drop out early in both races with technical problemes. Bennie Streuer and Kevin Rousseau won the first race with their 600cc sidecar. Seven-time world champion Tim Reeves with passenger Mark Wiles also rode a 600cc sidecar against the 1000cc ONK-BK Sidecars. In the second race Reeves showed why he is seven-time world champion, coming all the way from the last position on the grid and winning the race. Hendrik Jonker and Patricia Visscher won both races for the Camathias Cup.

New Belgian Twin Trophy delivers exciting races
The Belgian Twin Trophy was on the program for the first time and this resulted in great races. In the first race it remained exciting until the last Molenbocht with three riders together, including Hamove member Marcel Zuurbier. The Czech Petr Najman was the first to cross the finish line before Laurent Hoffmann and Zuurbier came in third. Also in the second race there was a nice battle at the front. Hoffmann was also the strongest in this race. This time the Belgian Nico Verelst became second just before Zuurbier, who scored his second podium of the day. Najman finished fourth in this race. In the NK Classics-IHRO, the win in both races went to Marc Beltman and Gerard Rike won the 2-stroke class. Ton Groot rode his first race in Hengelo GLD 50 years ago and still managed to score a great fifth and seventh place in the NK Classics-IHRO.

Well visited riders parade
The event was kicked off on Friday evening with a riders parade from the circuit to the village center of Hengelo. A large number of bikes and sidecars took part in the parade. After the parard, the riders and teams lined up on the Spalstraat for a riders presentation. There were a lot of people in the village center and there was a beautiful atmosphere, which made the 2019 riders parade a great success.
De Hamove wants to thank its volunteers for their commitment to the event and to thank all spectators for coming to the Varsselring!